Over the last week of January, photographer David Yarrow was in Australia documenting the devastating bush fires that have destroyed communities, wildlife and wildlands. Using the striking and poignant images that he captured of the effects of the fire, Yarrow and environmental nonprofit organisation WildArk is today launching the #KoalaComeback Campaign to raise $2 million to support recovery efforts in Australia.

David’s large Monochrome black and white images typically sell for upwards of $50,000 with highs at $100,000, but this campaign allows supporters to get his image ‘Survivor’ for a fraction of this cost – at $1000, with digital images from $10. Monies raised through The #KoalaComeback Campaign will go to the ground where critical wildlife and ecosystem recovery efforts are already underway.  WildArk and Global Wildlife Conservation are targeting organisations who are vital in this recovery process such as Two Thumbs Koala Sanctuary, Port Macquarie Koala Hospital, the Byron Bay Wildlife Hospital, Australian Wildlife Conservancy and habitat rehabilitation on Kangaroo Island and throughout NSW and Victoria.

How We Are Supporting the #KoalaComeback Campaign

We are proud to be supporting long-term client and friend, David Yarrow, with the #KoalaComeback campaign by producing the 1000 prints he is due to sell. Ken Sethi, Genesis CEO, explains our involvement:

“It is deeply saddening to see the devastating effects of the bushfires in Austrailia. With the rest of the world, I have watched and listened with sadness as news of the death and destruction of animals, people and their homes.

From so far away, it is hard to know how to help. That is, until David called me at 6.30am on a Saturday morning with news of his time in the Australian bushfire territory. I heard his first-hand experience of the sheer horror and devastation and was inspired by his drive and desire to help as much as possible. When he asked me if I would be interested in donating 1000 prints, to help him raise a target $2m, I agreed – my immediate reaction, without thinking was “yes, of course”. No further questions about the fundraising, just the logistics – which image, at what size, and when can you send me the file?

Having known David for 25 years, I know he doesn’t do things by halves. Everything he does is with complete conviction and passion. So, if he’s planning on doing something to help the people and wildlife of Austrailia, I want to be a part of it – it’s that simple.”

How You Can Support the #KoalaComeback Campaign 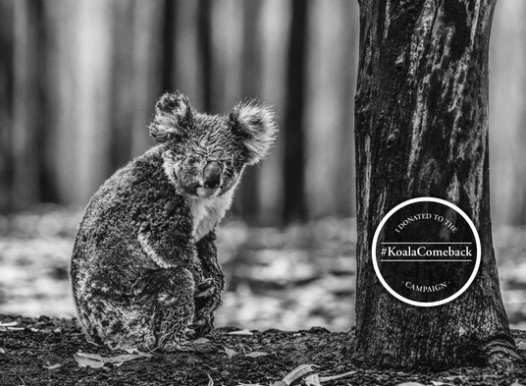 Join Tom Brady, Leonardo DiCaprio, Cindy Crawford, Cara Delevingne, Alessandra Ambrosio and Chris Hemsworth by making a donation of $1,000 or more to claim your own signed edition of “Survivor” and support The #KoalaComeback Campaign to reach the goal of $2 million raised.

Spend $10, $25, $50 or $100 and you will receive an email with a digital version of David Yarrow’s watermarked image “Survivor”. By posting the image on your social channels you can get the campaign to go “viral” and help us reach our target of $2 million.

Genesis Imaging Open from 26th May

Our number one priority is the health and well-being of our team members, clients and our wider communities, therefore we will be following the Government’s latest guidance for a Covid-19 secure workplace. Our procedures are outlined below.

I am grateful for all of your patience and support in these difficult times and extremely thankful to our team members who have been working hard to deliver our services.

In the meantime, we will continue taking telephone and email enquiries and ensure that they are dealt with promptly. If you have an urgent job please call us on +44 (0)20 7384 6200.

We look forward to seeing you soon.